I signed up for another virtual race. This one consists of four distances, and if you do all four, your get a buckle. The longest distance was 50k. I did that today. It was an ordeal. For those of you that don\’t know, 50k is 31 miles, but I did 31.46 miles.

I started off at 4:00 am. It was a delightful morning, but I knew it was going to heat up. I wore the bib provided by the race, just to feel and look like I was in a race.
I ran the first 20.3 miles along bike paths near my house. They went really well due to coolish temperatures during the night and a small amount of cloud cover until 8:30 or so. I included the bike path in Hodge Park which goes north to south across the park. The first time I went across the park, no one was in the parking lot near the golf course start. The second time, about 50 men were there, some at the driving range. Some at the putting greens and many many waiting in carts. There was a veritable traffic jam of golf carts. I was not impressed by the golf scenery.
After the first 20 miles, I took a pit stop at my house. It was by then getting hot and my feet felt like they had just run 20 miles. I battled with thoughts of quitting (its just a virtual race, who cares what you do), but somehow, I made it back out the door (I would know whether I quit or cheated and feel bad about myself). This time, I drove 2 miles to a park that had some trees, planning to do the rest of the 50k in the shade. I did it, but it did get hot, even in the shade. The last 5 miles, I only walked.
It was exciting to see those last few miles get done and my Garmin slowly make its way to 31 miles. Especially since my brain was devising various ways of cheating. The honest finishing is so much sweeter when you realize how much your brain was working against you. But doing it was awesome. I did it!!
(I complain about the heat, but really, Missouri is not at all hot like Houston area where I used to live. )
I thought alot about this blogger named of Dixie of Homemade Wanderlust. She hiked the AT, the CDT, the PCT and a trail in Spain. I relate to her because she was an engineer who escaped her cubicle. I so appreciate that I am not in a cubicle, sitting at a computer all day. I had the courage to say, \”this is enough money,\” and get out.
I\’m saving up all the virtual race swag I\’ve been getting and making a little shrine to 2020 on a wall in my house. Four events done so far, and at least two more which I\’ve signed up for, but they haven\’t started.

I haven\’t been to work or any fellowship meetings since. March 18, a little over a month ago. The people I see are those who use the trails or those in grocery stores. I have had about 5 telephone conversations. I have attended to 13 hours of Abraham Now. Since March 18, I have run 384 miles. You can see that the virtual race is only a melding in to miles I was going to do anyway.

I have for most of my life been a solitary, but never has the needle been closer to 100% for so many days. Never have I shut off the alarm clock for that many days. There has been hours of reflection on my life and my spiritual connection. Contemplative prayer and running are obvious threads running through my entire life. Here in isolation, the two threads entwine, back and forth. My isolation is not about staying busy but about existing as being and relishing how bare my consciousness can be. Who I really am becomes more and more obvious, but also has fewer words with which to explain it. Fewer words because my place in society is gone. There is no mirror. No position.

This morning, I didn\’t know what I was going to do or where I was going to do it. But I thought I would like to do prayer miles. Prayer miles are those miles done in contemplation. I chose a long bike path through a forest, strapped on my hydro-pak, and disappeared down the trail for 3 hours. Came home. Ate. Disappeared onto another bike path for two hours.

I\’ve changed during this period. I rediscovered the joy of drinking cold milk right from the gallon jug. Said good-bye to soy milk.

Yesterday I began a 10 day virtual race. I am feeling very real about earning a belt buckle for 100 miles and for some reason, my body feels like doing it faster than is really necessary.

Segment 1 was on the treadmill for 7.35 miles. Hate to say this, but it was cold and wet and windy outside and I just couldn\’t face it.

An odd feeling came over me yesterday afternoon as I was thinking about an evening walk. I had the idea that COVID is over for me and somehow, this virtual 100 mile run caused this displacement. What that means is my focus of attention is doing miles and caring for myself. I have no other intention for several days, and this is exactly how I dream of the perfect life. But the main point is that COVID has been displaced as a point of attraction. At this point, anyone can find a different point of attraction than COVID.

For day two, we had a totally clear sunshiny day. Still a little chilly and very windy. I made it outside for two runs in the morning. Segment 4 was 9.15 miles and segment 5 was 8.48 miles. In between morning segments, I drank a protein shake, took a gel, and ate a banana. Good fueling. Segment 6 was the 4.6 mile treadmill walk. Cumulative total 38.18 miles.

After a shower, food and rest, I\’m now walking slowly on the treadmill and listening to the radio. Just getting in a few miles (4.6) and not taxing my legs. And I\’m sick of the 20 mph wind which is still whipping things up out there. My cumulative total for 2 days is 42.78 miles.

Over 2,000 runners signed up for this event. 10% of the entry fee went to the WHO. That is pretty amazing. Lots of runners whose races have been cancelled and want to put their energy somewhere.

Virtual race starts tomorrow. It is 10 days. If I complete 100 miles, I get a buckle. In the mean time, the hoody, t-shirt and number arrived today. I am wearing the hoody already.

My feet are ready to go. I\’m looking forward to focusing on miles. I plan to get at least 15 miles per day. But if I can stay blister free, I\’ll do more. It is supposed to rain all night and snow early tomorrow. We\’ll see what time I go out. Too cold out there to wear a t-shirt.

Yesterday I ran 10 miles. I did it along the Missouri River. I hadn\’t see it for awhile so I enjoyed the image of power and strength. Running or walking feels good. This good feeling alone is a good reason to do it.

In the middle of social distancing, it is awesome to have something exciting to do.

UPDATE 4:10 pm — /success. 60 minutes on the elliptical this afternoon burned calories but didn\’t at all annoy the left toe.

A lovely day, chilly, sunny, windy. I went for a 6.2 mile walk this morning. A slow walk. A slow walk to anticipate an upcoming event. I signed up for a 100 mile virtual race. I\’m pretty excited to earn a belt buckle and remember this period of self isolation. For a real race, I\’d be tapering in order to be very fresh on race day. But now, I still want to go outside and enjoy hours of walking because walking is part of how I stand self isolation. But, I have one tiny injury problem that needs to heal before I unleash myself on 100 miles. Hence, slow walking.

Doing massive quantities of miles is a dream of mine, carried out with varying results over the past 18 years since I heard about ultra running. And every time I am off work, either between jobs or on vacation, the time has been used to do miles. Heck, every vacation has been to races. I love this. However, I have a fat short big toe which always gets blisters if too many miles are done. Since my last day at work in March, through today, I have jogged 264 miles, 95 miles just this month. So today, I decided that whatever exercise I took, it would be non-aggravating for the toe. Success so far. 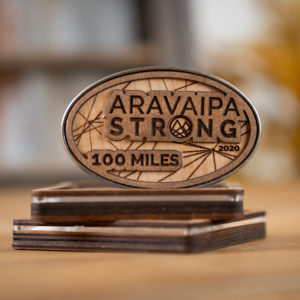